For our first Valentine’s Day as a married couple, I surprised Jon with reservations at the highest restaurant in the city – Vast. The restaurant is located at the top of the Devon tower, and on a clear day, the view is amazing.

I’d called to make reservations about six weeks in advance, but even then there was a lengthy waiting list because apparently some people make Valentine’s dinner reservations a year in advance. I get that Vast is popular, but a year ago the food there was horrible. But maybe there were plenty of fans of the amazing view who were optimistic enough to predict that Vast ownership would bring on a new chef. And that’s exactly what happened, about six months ago.

Two years ago when I took my son to Vast for a special dinner to celebrate his 18th birthday, and we had embarrassingly awful food, I swore I’d never go back. (Lay’s potato chips on top of iceberg lettuce makes for a salad?? Really.) Now, with chef Kurt Fleischfresser at the helm, I knew it had to have improved. Fleischfresser is owner of one of our favorites, The Coach House, as well as Sushi Neko, Irma’s Burger Shack and Will Rogers Theater.

Valentine’s was clearly a busy night for Vast, and we felt fortunate to be seated right next to a window. It was kind of high traffic area as far as staff were concerned, but we didn’t mind since we were just happy to be enjoying a very romantic date night. 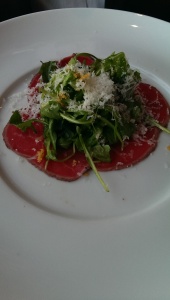 The appetizers were very good, and we were feeling relieved that Fleischfresser had come through for us. As we chatted, sipped on wine, took photos and reflected on the relaxing day we’d had, we realized that over an hour had gone by, …and we were still waiting on our entrées.

My wine glass was close to being empty by then, but our server never stopped to ask if I wanted more. Jon had to practically flag someone down to get a second dinner roll. We were both getting hungry.

Finally, about an hour and fifteen minutes after we sat down, our entrées were placed on our table. Jon noticed right away that his asparagus was missing.

When he brought it to our server’s attention and asked for some asparagus, she paused, cocked her head and said, “Yeah, I guess we can do that.” Never mind that an hour ago she’d told him there would be asparagus with his chicken.

She still hadn’t noticed that my wine glass needed attention, but I just decided to finish my last couple of sips with my lobster and not worry about it.

The lobster was wonderful, although a little too buttery, and the vegetables were perfect. After we’d finished, there was more of a wait, (which by then we were getting used to), but finally our server dropped by to take our plates and let us know that there was a chocolate dessert coming our way.

It was definitely a great way to end a Valentine’s dinner…twin chocolate mousse cakes that were beyond decadent, drenched in chocolate sauce and wrapped in chocolate “scarves.” The fresh berries sprinkled on top were a great combination with all the chocolate.

Before we left, I happened to run into Chef Fleischfresser in the hallway, and I thanked him for the wonderful way he has reinvented Vast’s menu. There was a definite Coach House influence. I told him it was a huge improvement compared to the previous chef, and that we were very happy with our dinner. I didn’t mention the staff, though, who clearly need training, but hopefully that will work itself out. We’ll give it more time before we return to Vast for dinner. And whenever that is, we’ll look forward to a more upscale and professional experience that the location deserves.

(Note: Since I’m not the most patient person, waiting for a long time for food or anything else doesn’t work well with me. Unfortunately, the long wait without any staff attention, paired with our inexperienced/unprofessional server, influenced my overall rating below. Jon was a little bit kinder, but he’s such a nice person!) 😉